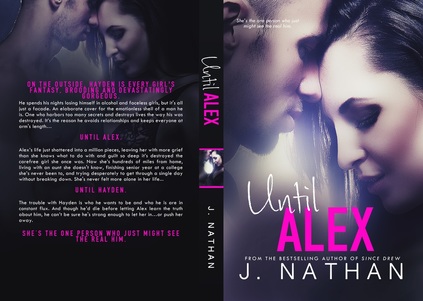 On the outside, Hayden is every girl's living breathing fantasy, brooding and devastatingly gorgeous. He spends his nights living every guy's fantasy, losing himself in alcohol and faceless girls. But it's all just a facade. An elaborate cover for what he really is. An emotionless shell of a man who harbors too many secrets and destroys lives the way his was destroyed. It’s the reason he avoids relationships and keeps everyone at arm's length…

Alex’s life just shattered into millions of pieces, leaving her with more grief than she knows what to do with and guilt so deep it’s destroyed the carefree girl she once was. Now she’s hundreds of miles from home, living with an aunt she doesn't know, finishing senior year at a college she’s never been to, and trying desperately to get through a single day without breaking down. She's never felt more alone in her life...

But the trouble with Hayden is who he wants to be and who he is are in constant flux. And though he’d die before letting Alex learn the truth about him, he can’t be sure he's strong enough to let her in…or push her away. She’s the one person who just might see the real him.
AMAZON US
AMAZON UNIVERSAL
iBooks
Kobo
Google Play
Barnes & Noble

Thanks to Lana at Dirty Girl Romance Book Blog
for the wonderful Until Alex teasers!