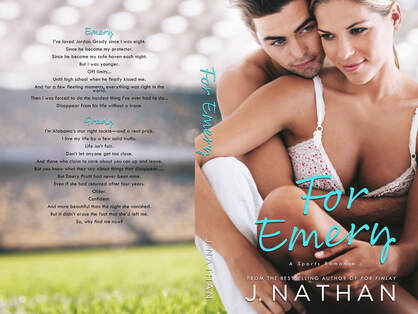 Emery
I’ve loved Jordan Grady since I was eight.
Since he became my protector.
Since he became my safe haven each night.
But I was younger.
Off limits...
Until high school when he finally kissed me.
And for a few fleeting moments, everything was right in the world.
Then I was forced to do the hardest thing I’ve ever had to do...
Disappear from his life without a trace.
​
Grady
I’m Alabama’s star right tackle—and a real prick.
I live my life by a few solid truths.
Life isn’t fair.
Don’t let anyone get too close.
And those who claim to care about you can up and leave.
But you know what they say about things that disappear...
But Emery Pruitt had never been mine.
Even if she had returned after four years.
Older.
Confident.
And more beautiful than the night she vanished.
But it didn’t erase the fact that she’d left me.
So, why find me now?
THE FOURTH STANDALONE New Adult Sports Romance in the For You series. Each book follows a new swoonworthy couple.