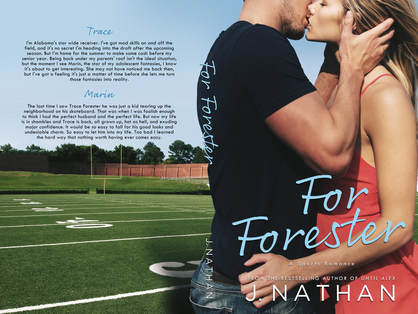 Trace Forester is Alabama's star wide receiver. Being back under his parents' roof for the summer isn't the ideal situation, but the moment he runs into Marin, the single mom down the block, he knows it's about to get interesting. She may not have noticed him back when she was the star of his adolescent fantasies, but he's going to make damn sure she does now.

The last time Marin saw Trace he was just a wild kid in the neighborhood. That's when she thought she had the perfect husband and perfect life. But now, with her life in shambles, Trace is back in town for the summer. And he's offering to spend time with her son, doing all the things a dad should be doing with him. And, while Marin doesn't want to be drawn to Trace's good looks, undeniable charm, and connection with her son, being swept up in his world is hard to resist.

But what happens when summer ends and Trace returns to school? Is it just her son he'll be leaving? Or will Marin be left with another broken heart?

​A STANDALONE New Adult Sports Romance in the For You series. Each book follows a new couple.