J. Nathan is the author of new adult, sports, and rock star romances with cocky heroes and sassy heroines. 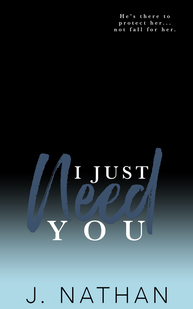 Blogger/Bookstagrammer Signup
AMAZON US
AMAZON UNIVERSAL
IBOOKS
KOBO
BARNES & NOBLE
GOOGLE PLAY
Kresley
Studying abroad was my chance to gain independence away from my privileged life in California. But, when there’s a kidnapping attempt on my life, I’m forced to return home to finish college. I just never expected to get stuck with a pompous, know-it-all bodyguard who watches my every move with nothing but disdain. One whose good looks don’t soften the cold, impenetrable wall he wears like armor.

​Tristan
I pride myself on being a professional and taking my job as a bodyguard seriously. But, nothing could prepare me for the high maintenance, rich girl I’m hired to protect. She’s got a smart mouth, is hell bent on pushing my buttons, and doesn’t take the threats against her seriously. And despite the nightmares that plague her dreams, or the fact that I’m the only one who knows about them, I’m not there to befriend her. I’m there to protect her…no matter how much she intrigues me.

Jabs will be exchanged, glares will become the norm, jealousy will rear its ugly head, and sparks...well those damn things will inevitably fly. But will it all come with a dangerous price?

Sophia Galloway has no idea what she’s walking
into when she transfers to Crestwood University.
Returning to Texas was her only goal.
But nothing could prepare her for stepping foot
on a campus where no one is what they seem.
In a world where frat guys think they can do no wrong.
And sorority presidents think they run the show.
Sophia’s about to find out what happens when she
unknowingly crosses the wrong guy,
pisses off the wrong sorority sister,
and refuses to play by anyone else’s rules.

A life will be lost.
Lies will be told.
Hearts will be broken.
And secrets...well secrets are meant to be revealed.

Is there anyone she can trust?

AMAZON US
AMAZON UNIVERSAL
Treyton Collins is Savage Beasts’ drummer.
He’s the rock band’s resident bad boy
with the troubled past, tattoos, and tongue ring to prove it.
No woman has yet to be immune to Treyton’s charm.
That’s why he’s fascinated by the one who is...
She couldn’t be any more different than him.
She’s business suits and he’s torn jeans.
She’s bossy and he’s fun-loving.
She’s got an attitude and he can’t stand it.


Brielle Patrick is Savage Beasts’ publicist.
Her latest publicity stunt left her on the outs with the band.
But, if nothing else, Brielle is persistent.
And she’ll prove it by spending the summer on tour with the band.
She’s convinced herself she’s there to keep Treyton out of trouble.
But that isn’t the only reason she’s overseas for two months.
She’s searching for something her life is missing.
Imagine her surprise when she finds it when she least expects it.
With the guy she least expects to find it with.

AMAZON US
AMAZON UNIVERSAL
Kozart Savage is the world's biggest rock star. At twenty-five, he's got it all. Money. Fame. And the adoration of fans everywhere. He thought that was enough to make him forget his past. Enough to transform his distrusting heart. Turns out that's not how it works...Then he meets a bridesmaid hiding out in a hotel bar. Probably the only girl on the planet who doesn't know who he is. But she seems to be the one girl who can give him something no one else can.

College senior, Aubrey Prescott, is trying to escape humiliation. While drowning her sorrows in a hotel bar, she meets a handsome stranger. One who quickly makes her forget why she's there. One who, after an unforgettable night, disappears without a second glance.

But you know what they say about things that disappear...